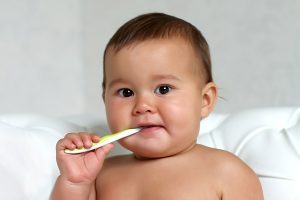 The primary goal of parenthood is to raise a healthy, happy infant but this isn’t always as easy as it would appear. Many items marketed to parents as safe, fun and healthy entertainment can be just the opposite.

Promise a young mom a worry free shower or a leisurely conversation with a friend while her baby is presumably being safely entertained in a walker, saucer or bouncer and she is going to jump at it. The problem is that many of these products are anything but safe.

It has been suggested that the biggest problem with baby walkers, saucers and jumpers is the position the baby is standing in and how it affects their future walking. Rather than heel to foot pad walking, it may predispose them to toe-walking, which can lead to posture issues as they get older.

When standing by themselves holding onto a piece of furniture the child is supporting their weight with their legs and trunk, utilizing stomach and gluteus muscles to keep themselves upright. When standing in a baby walker, saucer or jumper, the child’s weight is typically being supported by their hips, crotch and underarms as they lean forward in the support mechanism. This allows them to stand with a lordotic or swayback posture, which is not beneficial.

Health Canada has issued a Consumer Product Safety report stating that in a 15 year span they received 47 complaints related to suspended baby jumpers. The majority of the complaints were based on mechanical failure which resulted in injuries that included everything from bruising to a skull fracture.

A search of the dangers of baby bouncers and jumpers in the UK reveals several stories of infant’s deaths because of the improper usage of the item or not having assembled the item correctly.Australia’s version of the Baby Bouncer is the Jolly Jumper and it can be equally dangerous if it is not installed correctly. Be aware that any modifications made to the original equipment will put the child using the item at risk of serious injury.

As of June 2011, it is illegal to manufacture or sell any crib that doesn’t meet new tougher federal guidelines. Due to the number of deaths attributed to weak mechanisms for drop-down sides and poor supports, the newer guidelines require stronger material, mattress supports and hardware that can withstand active toddlers.

Tags with the code 16 CFR 1219 for full-size cribs and 16 CFR 1220 for compact-size cribs assure concerned parents that their infants and toddlers will be safe. Yet, the crib design isn’t the only risk for infants.

Many parents don’t realize that the things they put in the cribs with their babies are equally dangerous. For instance, bumpers are a commonplace item to find in a crib, as parents don’t want their little ones hitting their heads on the crib, and yet if the bumpers are too puffy or improperly installed they pose a risk of suffocation.

Other items with such a risk include stuffed animals, pillows and even blankets. Anything that an infant can get in their face, wrapped around their head or neck or that can fall onto their face while they’re sleeping is a danger. And just because the baby can’t reach a cord now doesn’t mean that they won’t be able to eventually. It’s vital not to place anything that can harm a child anywhere in their sleeping area. Parents cannot assume that they will be there the first time their child rolls over or scoots to another area of their crib.

While not necessarily considered an infant toy, these items are typically part of an infant’s first few years and can negatively affect their developing spine.

While in the womb the fetus’ spine develops in a “C” pattern, which is perfectly normal. As the child grows and they become weight-bearing, their spine should begin to develop a more mature curvature, almost like a stretched out “S”.

A baby’s developing spine can be affected by the repetitive positions they are put in. Car seats and strollers conform the child’s spine to the “C” pattern and, if used for long periods of time, can interfere with the normal development of the mature curvature.

During the first year of life an infant will begin by developing their large motor skills: for instance, crawling and walking. The fine motor skills are developed later.

By the age of 3 months an infant will begin reaching for objects but will typically close their hands too early or too late to actually grab the object. By 9 months they have typically developed enough hand-eye coordination to actually pick up objects. At about a year old, they can usually bang objects together and by a year-and-half be able to manipulate the objects their holding.

As a parent, it’s important to provide a baby objects that will help promote this small muscle development. The recommended toys would include rattles, stacking toys, shapes that are sorted into containers and building blocks as these will help to encourage their hand-eye coordination.

When considering what toys or items to purchase it’s important to determine whether or not the items are imported. Many times items produced in other countries will not meet the same high standards of production required for safety.

China is the leading exporter of toys worldwide to Canada, the UK, Australia and the U.S., providing 80% of the toys sold in most of these countries.

In 2007 toys received from China were determined to have a hazardous level of lead in the paint. While this was caught and a recall was put in effect, many times these warnings come too late after there has already been harm or injury to an infant.

Dangers of imported products can also include chemical treatments used to either sterilize or preserve fabrics, wood and other materials. These chemicals might be absorbed by these materials. It’s wise to take the time to thoroughly research an item prior to purchase and use.

Please visit the following websites: www.safekids.org or www.healthytoys.org to find the latest information on toy safety.

Your Doctor of Chiropractic is the only healthcare professional who recognizes the importance of spinal development and how a child improperly weight-bearing or standing can have an impact on that development.

If you are concerned about any of the items that you are letting your child use, please ask Drs. Chris or Melissa Tosczak for more information.